Sambo  or Sambos is a term for a person with African heritage and, in some countries, also mixed with Native American heritage (see zambo). 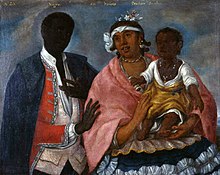 Formerly, it had the technical meaning of a person having a mixture of black and white ancestry, more black than white—contrast with mulatto, quadroon, octoroon etc. In modern US English and British English, the term “Sambo” is considered offensive.

The word “sambo” came into the English language from the Latin American Spanish word zambo, the Spanish word in Latin America for a person of mixed African and Native American descent. This in turn may have come from one of three African language sources. Webster’s Third International Dictionary holds that it may have come from the Kongo word nzambu (monkey). Note that the z of (Latin American) Spanish is pronounced like the English s rather than as the z in the word nzambu. The Royal Spanish Academy gives the origin from a Latin word, possibly the adjective valgus[4] or another modern Spanish term (patizambo,) both of which translate to “bow-legged.”

The equivalent term in Portuguese-speaking areas, such as Brazil, is cafuzo.

Examples of “Sambo” as a common name can be found as far back as the 18th century. In Thackeray’s novel Vanity Fair (serialised from 1847), the black skinned Indian servant of the Sedley family from Chapter One, is called Sambo. Similarly, in Harriet Beecher Stowe’s novel, Uncle Tom’s Cabin (1852), one of Simon Legree’s overseers is named Sambo. Instances of it being used as a stereotypical name for African Americans can be found as early as the Civil War.

Sambos Grave is the 1736 burial site of a young dark-skinned cabin boy or slave, on unconsecrated ground in a field near the small village of Sunderland Point, near Heysham and Overton, Lancashire, England. Sunderland Point used to be a port, serving cotton, sugar and slave ships from the West Indies and North America.