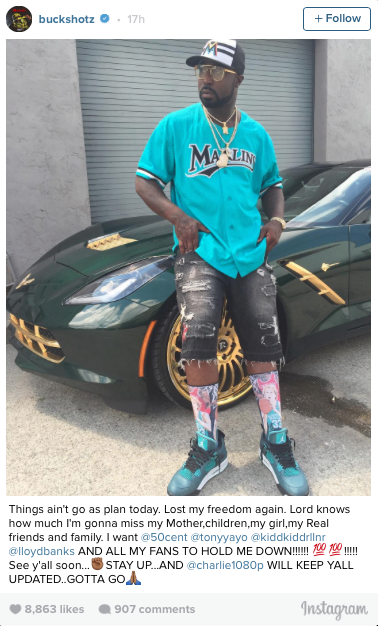 Rapper Young Buck is going to be spending the next seven months in prison for violating the terms of his probation.

The 35-year-old, also known as David Brown, was released from the prison three years ago after being convicted of unlawful gun possession.

He has since had a number of run-ins with the law, including an arrest last month for allegedly kicking in a door and threatening his ex-girlfriend.

Back in 2013, Brown was convicted on two weapons charges and was sentenced to 18 months in prison and three years of supervised release.

Part of those conditions required Brown to participate in drug testing.

In 2015, Brown pleaded guilty to covering up his marijuana use by providing false urine samples during required drug testing. He was sentenced to 18 months of probation in that case.

In March 2016, Brown allegedly called the fiance of the mother of one of his children. During that call, he allegedly used “various derogatory and racial epithets and threatened him with physical harm.” The phone call happened after Brown was told he was violating his child support and visitation order.

Brown was summoned to court and was told not to violate any law while he awaited a hearing for the violation of his probation.

In July, a different ex-girlfriend said Brown kicked in the door of her home and threatened her.

Brown was arrested for violating his probation during this incident and was ordered not to contact the woman. After he was released, he reportedly contacted the woman over 100 times.

When Brown appeared in court on Wednesday, he admitted to violating his probation. He was immediately taken into custody after being sentenced.